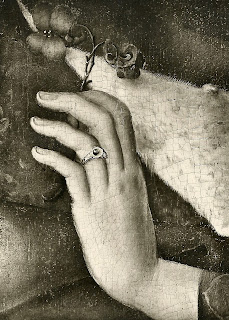 But certainly, he came more and more to be unable to care for, or think of soul but as in an actual body, or of any world but that wherein are water and trees, and where men and women look, so or so, and press actual hands. It was the trick even his pity learned, fastening those who suffered in anywise to his affections by a kind of sensible attachments. He would think of Julian, fallen into incurable sickness, as spoiled in the sweet blossom of his skin like pale amber, and his honey-like hair; of Cecil, early dead, as cut off from the lilies, from golden summer days, from women’s voices; and then what comforted him a little was the thought of the turning of the child’s flesh to violets in the turf above him.